I recently traveled to Abu Dhabi for the Abu Dhabi Science Festival, a chance to show our hydrogen fuel cell cars to a whole new group of students.  Aside from the incredible cultural experience of living and working in a foreign country for an extended period of time, it was a remarkable opportunity to compare students in a nation on the other side of the world to the students I’ve taught and observed here in the US.

The students came to the Science Festival from a wide array of backgrounds.  The mornings were full of school groups, some of whom had traveled more than three hours from the far-flung reaches of the country just to get there.  The evenings were open to the general public, and parents bought tickets to give their children the chance to experience as many of the Festival’s activities as possible.

Our activity was a simple one: we had six fuel cell cars, and students had to get them working in order to be able to drive them around our track.  We built all kinds of faults into the fuel cell cars, loosening bolts, unplugging wires, and generally making the cars impossible to operate without some kind of repairs.  Students had a checklist to guide them through possible faults, though every now and then they created issues of their own by crashing the car.  Despite being driven wildly by certain students, the cars managed to survive relatively unscathed, though some did require some emergency surgery to keep them running for all 12 days of the Festival.

The students, as young as 9, were largely attentive and interested in the activity.  The promise of getting to play with a remote-controlled car proved to be more than enough motivation to get them into the science of renewable energy.  To help guide them through the activity, we had a volunteer group of students from the local universities.  These “Science Communicators” were trained in some of the technical terminology of the cars and renewable energy in general and then were set in charge of groups of students.  Some of them were engineering or science majors, some were education majors, and some were just interested in helping out with the Science Festival.

More than 1000 students came through our workshop during the 12 days of the festival, learning about renewable energy and the promise of hydrogen fuel cell cars.  They’re lucky enough to be living in a country that already values renewable energy technology, but that’s a story for another post. 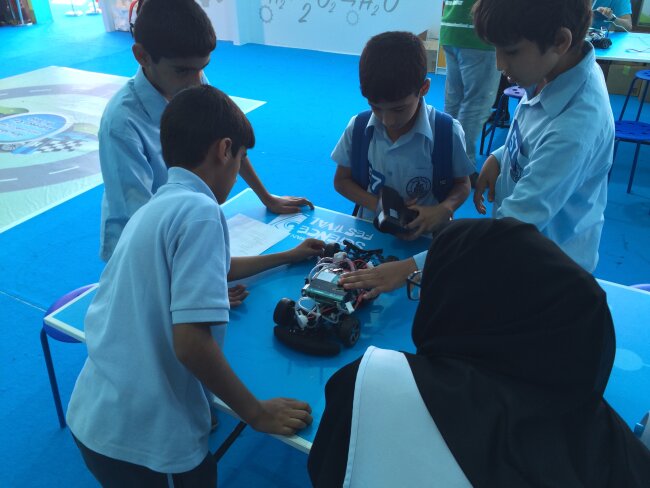