On July 7th Hyzon celebrated the continued progress it is making in building out its Bolingbrook, IL facility by opening it up to the public, hosting a hydrogen panel, and giving people tours of its fuel cell stack and MEA production lines during the Midwest Hydrogen Summit.  (As H2GP racers know, MEA stands for membrane electrode assembly; and as Hyzon’s marketing manager will tell anyone who asks the MEA is the “heart” of a fuel cell.”)  The event was an extremely important milestone both for Hyzon and the United States, since Hyzon is now the first company to produce heavy-duty fuel cell systems in the United States.

While the fuel cell stacks that Hyzon is manufacturing produce 120kW of power, the underlying technology in them is very similar to what H2GP racers use in their cars.  Both the Hyzon and H2GP fuel cell stacks use hydrogen to produce electricity and water.  Later this year production of 200kW fuel cell systems is expected to begin in Bolingbrook, which will likely be the most powerful fuel cell stack created for the foreseeable future.

The facility is capable right now of producing 5 of the 120kW stacks per in eight hours with one production machine.  It also only takes Hyzon one hour to test a fuel cell stack to see if it meets the require specifications for efficiency and endurance, which is fairly impressive.  For now, less than 50 fuel cell systems will be produced in Bolingbrook per year, but as the world continues its transition to a hydrogen economy that number will only increase for the next several years.

However, while H2GP racers can take a fuel cell stack and integrate it into a world-class racing car as well as take fuel cell stacks apart and put them back together again, many adults are a few light years behind H2GP participants where hydrogen and fuel cells are concerned.  There were a number of adults from the private sector at the event, including a manager from Ingredion, and they attended the event, in part, just to learn what a hydrogen fuel cell stack does. Additionally, there are a lot of people at all levels of the United States government that are also still trying to figure out what a fuel cell is, which is something that Illinois State Senator Laura Ellman noted at Hyzon’s Midwest Hydrogen Summit.  This means that H2GP participants are well ahead of 99.9% of the adults on this planet when it comes to having foundational knowledge to help drive the hydrogen and fuel cell industry forward, which is a major accomplishment and one that many organizations around the world would like to take advantage of.  The H2GP program remains the only leading-edge initiative that is preparing students for careers in the battery and hydrogen industries.

Perhaps the most pressing take away from Hyzon’s event is that the hydrogen and fuel cell industry is really just getting started, and the need for hydrogen and fuel cell education is only going to increase over the coming decades.  This is one reason Horizon Educational remains committed to the H2GP program, because we are trying to ensure that as many young people as possible have the needed foundational knowledge and skillsets to succeed at the university level and in the workforce.  After all, if there is no planet B, then empowering young people to create a regenerative world is absolutely essential.

Yours Truly Poses With a Hyzon Fuel Cell Stack :) 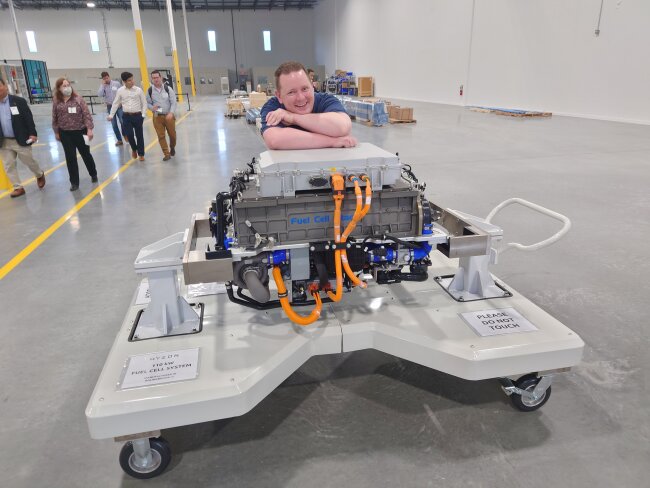